Reflections on some major changes in socio-legal studies (1989-2020)

Vincenzo Ferrari won a “doctoral” law degree from Milan University in 1962, has been a practising lawyer in Milan ever since and served as a lay magistrate in a country court of Northern Italy for fifteen years in the past. A disciple of Renato Treves, he was assistant to his supervisor’s chair, then lecturer and later professor in Sociology of Law in Cagliari University (1973-1983) and Bologna University (1983-1990), before returning to Milan university in late 1990. There, he was head of the Institute of Philosophy and Sociology of Law and, from 2000 to 2006, dean of the Law Faculty. Between 2004 and 2006 he chaired the Italian Conference of Law Faculty Deans. He is currently emeritus professor of Milan University and president of its Committee of Ethics.

Professor Ferrari has been lecturer or visiting professor in a number of Italian and foreign universities. He is honorary professor of Universidad Externado de Colombia.and of the Universidad Metropolitana, Caracas. He has been an active member of the ISA Research Committee on Sociology of Law for years, as a board member since 1978, vice-president (1982-1990) and president (1990-1994), and was also a member of the ISA Executive Committee from 1994 to 2002. He served as member of the Board of Directors of the IISL from 1989 to 2002. He was Scientific Director of the Oñati International Institute for the Sociology of Law from 2016 to 2018.

This work is licensed under a Creative Commons Attribution-NonCommercial-NoDerivatives 4.0 International License.

OSLS strictly respects intellectual property rights and it is our policy that the author retains copyright, and articles are made available under a Creative Commons licence. The Creative Commons Non-Commercial Attribution No-Derivatives licence is our default licence, further details available at https://creativecommons.org/licenses/by-nc-nd/4.0 If this is not acceptable to you, please contact us.

The non-exclusive permission you grant to us includes the rights to disseminate the bibliographic details of the article, including the abstract supplied by you, and to authorise others, including bibliographic databases, indexing and contents alerting services, to copy and communicate these details.

For information on how to share and store your own article at each stage of production from submission to final publication, please read our Self-Archiving and Sharing policy.

The Copyright Notice showing the author and co-authors, and the Creative Commons license will be displayed on the article, and you must agree to this as part of the submission process. Please ensure that all co-authors are properly attributed and that they understand and accept these terms.

Oñati Socio-legal Series (ISSN 2079-5971) is indexed on the following platforms: 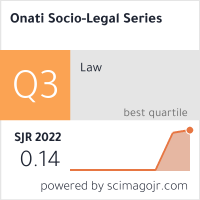 Oñati Socio-Legal Series and all its contents are published under the Creative Commons Attribution‑ Noncommercial ‑ No Derivative Works 4.0 license.

You are free to share – to copy, distribute and display the work – under the following conditions:

For any reuse or distribution, you must make clear to others the licence terms of this work. Please contact l.kortabarria@iisj.es with any questions.